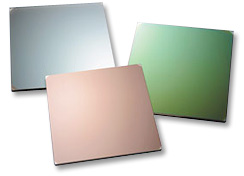 Semiconductor integrated circuits, such as LSI, and Ultra LSI, are the heart of computers and electronic products, that have become infrastructure of today's economy and society.

The original plates are called Mask Blanks. From these Mask Blanks, Masks are produced that are used in photolithography process of the production of semiconductor integrated circuits and form ultra fine patterns with 40 nanometer width and below. As a pioneer, ULCOAT developed low reflective mask blanks in the structure of metal chrome and chrome oxide.

Mask Blanks are the products which are formed from a chrome or molybdenum silicide based thin film on mainly quartz or soda-lime glass substrate. And they are coated by photosensitive resist materials which sensitive for electron or laser beam and resist for etching process to make circuit patterns.

There are two kinds of Mask Blanks that are low reflectance chrome-film Mask Blanks and attenuated phase shift Mask Blanks.

Low reflectance chrome-film Mask Blanks in the structure of metal chrome and chrome oxide are used by LSI makers around the world. And ULCOAT produced them as a pioneer. Also these products were made it possible to super LSI production.

Attenuated phase shift mask blanks were developed to realize the fine pitch patterns of ULSI circuit which beyond the optical exposure limitation. ULCOAT develop and sell attenuated phase shift Mask Blanks as the original plates of cutting-edge masks and respond to needs of much more precise and higher integrated semiconductors.

Attenuated phase shift Mask Blanks are made by oxidize, nitriding and molybdenum silicide which form as a semitransparent film on a synthetic quartz glass plate.